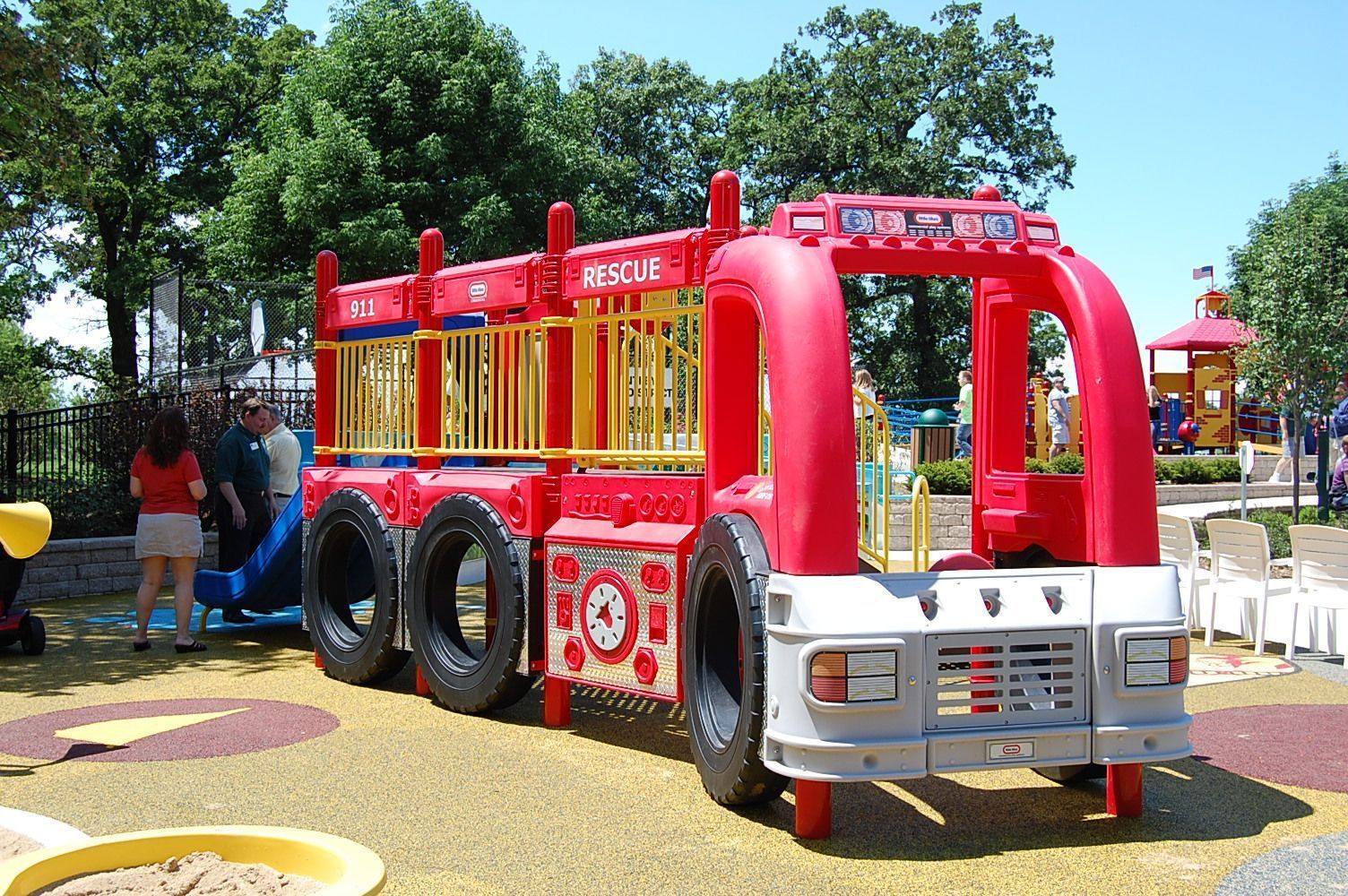 Huntley, Ill. (pop. 24,291) is a village about 50 miles northwest of downtown Chicago. Fun fact: Woodstock, a neighboring town just 11 miles to the north, stood in for Punxsutawney, Penn. for the film “Groundhog Day.”

The older section of Huntley is in keeping with the village vernacular. There’s a public square and gazebo; Woodstock Street, just west of the square is brick-paved. Huntley’s slogan is “The friendly village with country charm.”

Just southeast of the square across Route 47 is the Huntley Park District. Its main founders, Edwin Deicke and his wife Lois, donated $35,000 to purchase part of Donahue’s Woods, and donated 28 acres to create the park district. Mr. Deicke served as one of the first board members of the park district, remaining an honoree commissioner until his death in 1984. On December 31, 1999, Mrs. Deicke passed away. It’s fitting the park and playground bear the Deicke name. The park, while small, has over a mile of jogging paths on the perimeter. There’s a baseball diamond, donated by Sun City developer Del Webb, sand volleyball courts, basketball courts, four picnic shelters, an over-sized pond, two playground areas and a log cabin.

In developing the Deicke Discovery Zone playground, a high priority was placed on correcting the imbalance in recreation on behalf of children with disabilities. The design committee worked closely with the Northern Illinois Special Recreation Association to determine the special needs of disabled kids.

Several “Elements of Play” were identified:

The core conception motivating the planners of Huntley Park was focused on providing age-appropriate playground equipment on the playground for preschool children, while accommodating the greater physicality of teenagers with athletic fields. There was also the need to accommodate school age children who had outgrown the elementary climbing playground pieces, but were not ready for competitive contact sports.

Of course, designing a playground with kids in wheelchairs in mind can discriminate against other special needs like autism, blindness and Down syndrome. Focusing on one disability or special need can result in a playground that provides little stimulation or developmental opportunities for the majority of children. It was also important to bring together all area kids to participate in noncontact, noncompetitive activities, while seeking resolve social divisions based on disability, gender, age and stature on the playground. That is why Bankshot was one element included on the Deicke playground.

What should a playground be? For Rabbi Reeve Brenner it’s all about creative play and making friends on the playground, inclusion of all kids in non-aggressive activities with no body contact or intimidation, teaching civility and keeping kids fit and healthy by getting them out of their chairs and away from computer/TV screens for outdoor movement and fun.

As a youth, Reeve Brenner spent a lot of time playing basketball in Brooklyn, and made the basketball team at Brooklyn’s Yeshiva University High School, just a few blocks from Ebbets Field. He went on to play for Brooklyn College. He studied to become a rabbi at Hebrew Union College-Jewish Institution of Religion in Manhattan. He was a U.S. Army chaplain in West Germany (1964-1966), the taught Jewish religious thought and philosophy at St. Vincent College and Seminary in Latrobe, Pa. for two years, lived in Israel and served other congregations on the East Coast.

His passion for the game continued into adulthood as an avid player in pick-up games. In 1981, Brenner invented a variation of basketball that he simply called “Bankshot,” a game that wheelchair and able-bodied athletes could play together, with neither at a disadvantage. His inspiration for Bankshot came from his cousin, Janice Herman, a wheelchair athlete. Size, quickness and strength are really not factors in his game. Intelligence and shooting touch are what counts,” explains Brenner. There is no running, no jumping, no offense, no defense. Participants play alongside, not against each other. It is essentially a non-aggressive, accessible and inclusionary sport. In this spirit, he also founded the National Association for Recreational Equality (NARE).

Bankshot has been described as “a mini-golf game with a basketball,” but unlike mini-golf, a Bankshot court requires much less space, as the game is vertical, not horizontal. Most Bankshot courts have 19-stations, although the set up in the Deicke Park South Playground in Huntley Park is 12 stations with colorful backboards in varying shapes and dimensions and rims at different heights, plus one standard basketball backboard and rim. Players of course try to make baskets by banking the ball in off the backboard. Three shooting positions are marked in color in front of each basket.

The final station is trickier, with two backboards/rims stacked atop one another, so the shooter aims to direct the ball through both rims. Because of the varying heights of the rims and backboard dimensions players have to adjust the heights, arcs and angels of their shots. A soft touch helps.

Brenner’s noncompetitive focus for his game takes some cues from Alfie Kohn, who writes and speaks about education and parenting. Among his books is No Contest: The Case Against Competition (Houghton Mifflin, 1986/1992), a controversial treatise that questions putting children in competitive situations in which there is a winner and a loser, and points to the psychological damage done to the “losers.”

Brenner’s Bankshot is meant to be a sport without opponents, the participants playing the challenge of the court, not against one another. (Editor’s note: Of course if Bankshot existed when I was a kid, we would have been playing “horse” or one-on-one to make it competitive.) Most importantly, those in wheelchairs can play and enjoy the game just as much as those with no physical disabilities.

Bankshot Bankboards have been displayed at the Museum of Modern Art in New York City, the Israel National Museum in Jerusalem, The Discovery Science Museum in Connecticut and the Boston Children’s Museum.

The Deicke Discovery Zone playground had its grand opening and has been bringing in new visitors ever since then. 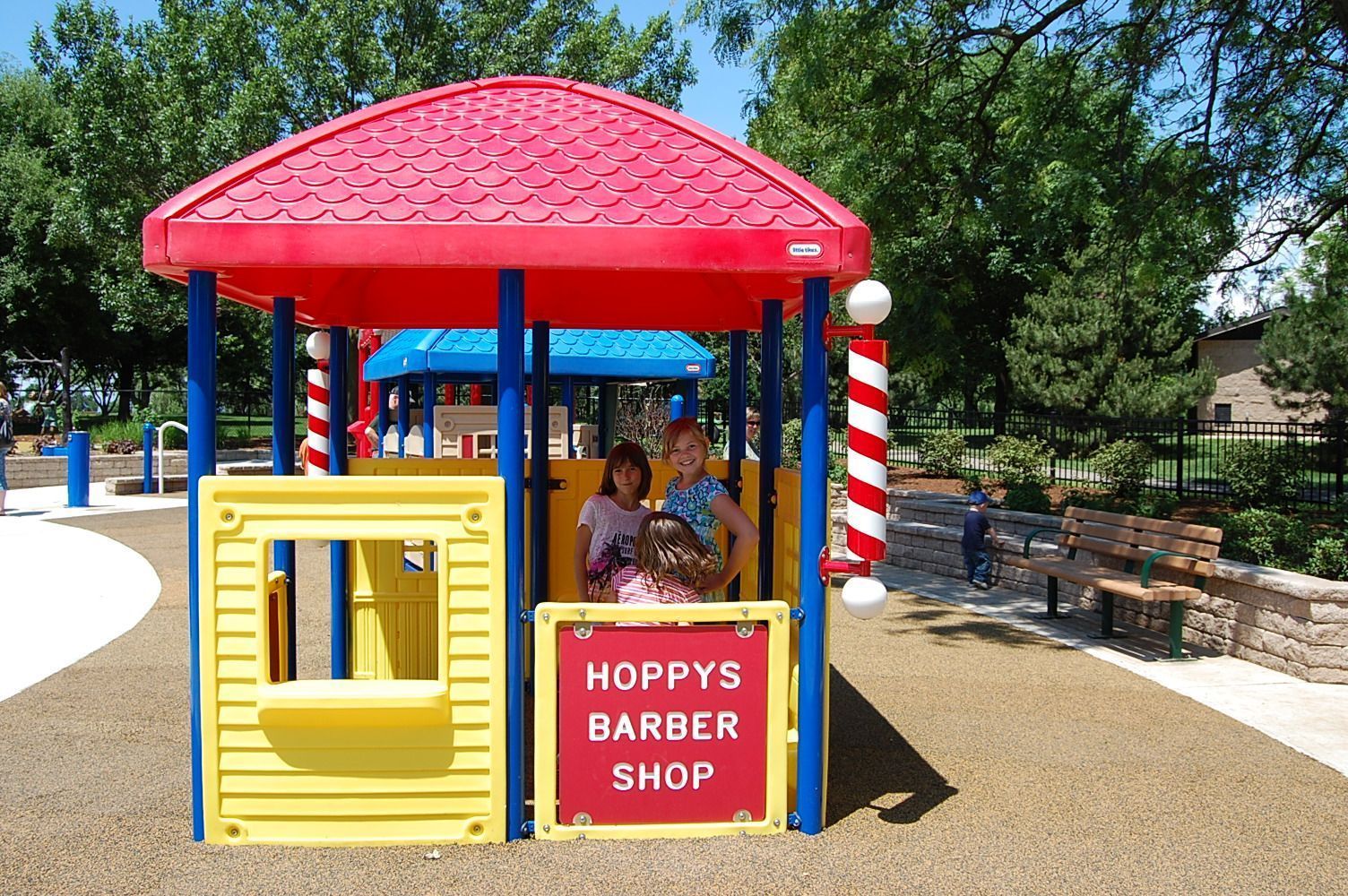 Note: Little Tikes Commercial is aware of the debate in the autism community over the use of identity-first (autistic person) and person-first (person with autism) language. While there is no language that fits both sides of the debate, we know the choice is a highly personal one, especially for individuals in the autism community. Little Tikes Commercial uses a combination of person-first and identity-first language.