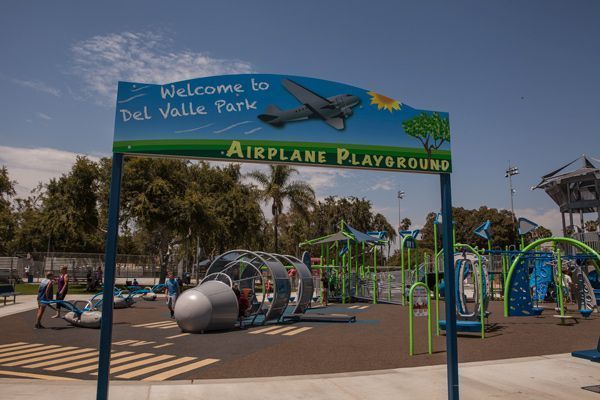 Del Valle Park in Lakewood, California earned its nickname as the “airplane park” due to the decommissioned Douglas Aircraft Company F3D-2 Skynight fighter jet that stands prominently as a memorial to local veterans. The jet was originally installed as play equipment, together with a rocket and flying saucer to complete the space-age themed playground. As heavy use caused the plane to deteriorate, and injuries resulting from playing on the jet increased, the jet was mounted atop a 12-foot high concrete pylon as a memorial.

Plaques naming the soldiers who gave their lives for their country were attached to the pylon. The jet was officially dedicated on Memorial Day 1964 in remembrance of the Lakewood residents who served their country. The tradition continues every Memorial Day, when Lakewood residents gather beneath the wings of the jet to remember those who are memorialized on the plaques.

Del Valle Park celebrated its 60th anniversary in 2014. During the ceremony, city officials revealed plans to redesign and expand the memorial plaza, including the replacement of plaques that had been stolen. The historic fighter jet would be restored as the centerpiece in the plaza, with enhanced computerized lighting effects to bring new life to the plaza. 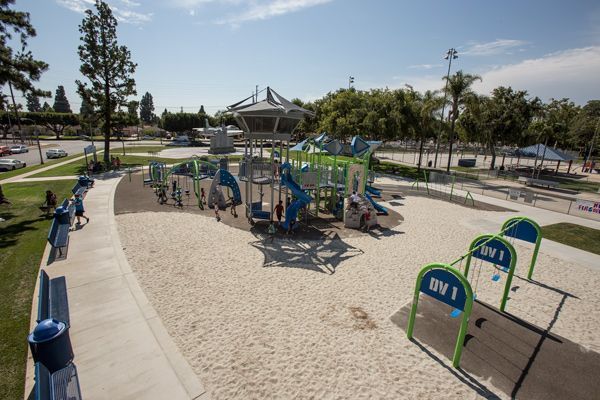 A bird’s eye view of the entire playground highlighting the control tower and swings with the Veterans Memorial visible in the background.

In Need of a New Playground

In addition to renovating the airplane memorial at Veterans Memorial Plaza, the City of Lakewood realized the need to renew the adjacent playground. When designing the new playground, city planners wanted to keep the spirit and theme of Airplane Park alive as way for future generations to learn about the history behind the memorial. The theme of the playground was intended to complement the memorial and tie into the theme of the park. 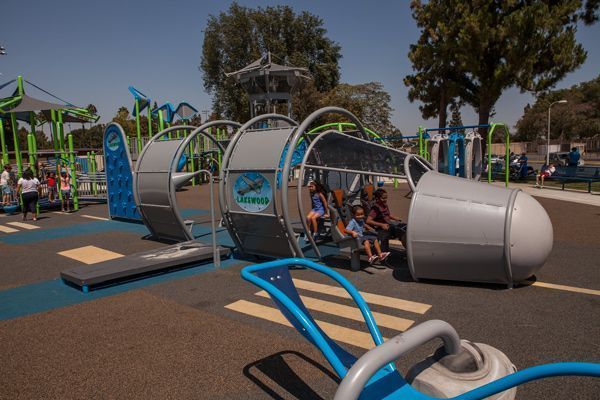 The ground level wheelchair-accessible plane allows children to become pilots and take to the cockpit, climb the tail of the plane, or sit and play in the fuselage.

Landscape architect firm Meyer and Associates designed a new layout for the park to accommodate a larger airplane memorial and a new playground about 20 feet from its original location. 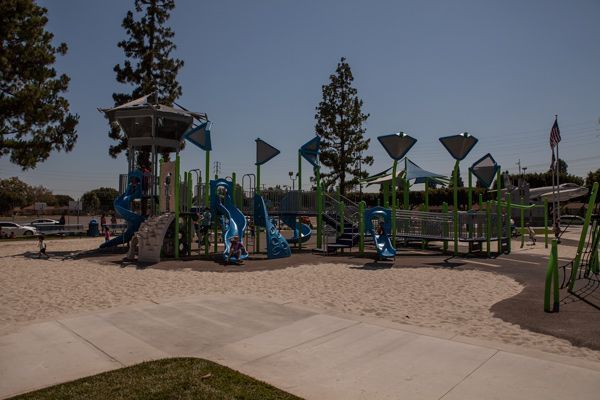 An overview of the playground shows the 96” tall control tower, diamond roof toppers, and the Veterans Memorial in the background.

Cindy Grabow of Pacific Park and Playground and the Little Tikes Commercial® Custom Design Studio put their design expertise together to come up with a playground that celebrated the proud history of the old play area, but with a fresh new approach. The winning playground design was an airplane field complete with opportunities for children of all abilities to play side by side. The themed play area includes runways, small planes, a large inclusive airplane and a 96” high control tower including another set of controls on a lower deck for inclusive play. Several types of play equipment are integrated to complete the accessible aviation masterpiece. 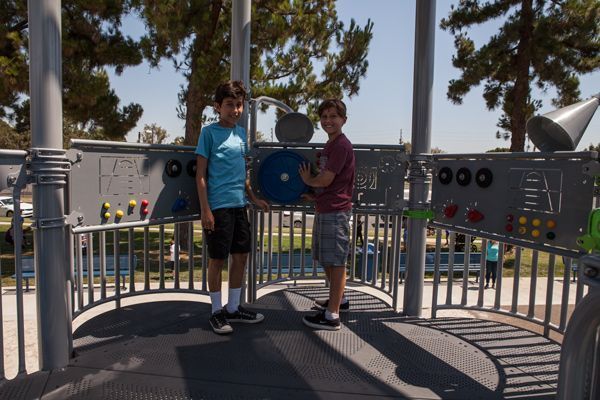 The upper level of the control center allows children to talk with others below or even in the plane! Interactive play panels with moveable dials and knobs are also shown. 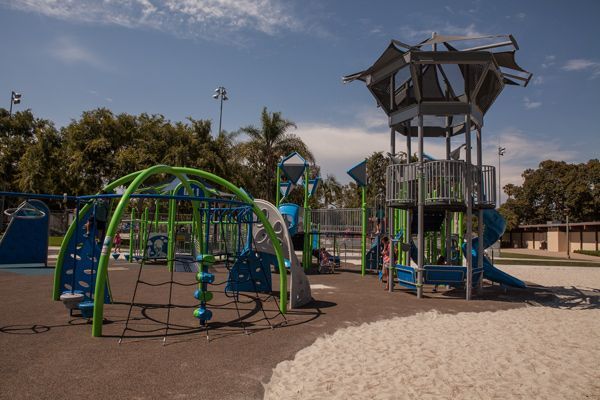 One of the most popular features at the new playground is the Little Tikes Commercial® equipment fitted with rope climbing and overhead events to challenge active children. Visible to the right is the two level control tower with accessibility at the lower level.

A ramped and accessible Little Tikes Commercial® play structure allows children of all abilities to play together. The 96” high control tower connects to the main structure. The inclusive design includes air traffic controls that allow for imaginative play on both the upper and lower decks. A zip line allows children to fly through the air. Children can rock back and forth on the wings of custom plane-themed rocking equipment. The ground-level wheelchair-accessible airplane allows children to become pilots and take to the cockpit where gear panels inspire budding pilots to prepare their plane as it waits its turn on the runway. The tail of the plane doubles as a climbing wall, while seats and panels line the fuselage. 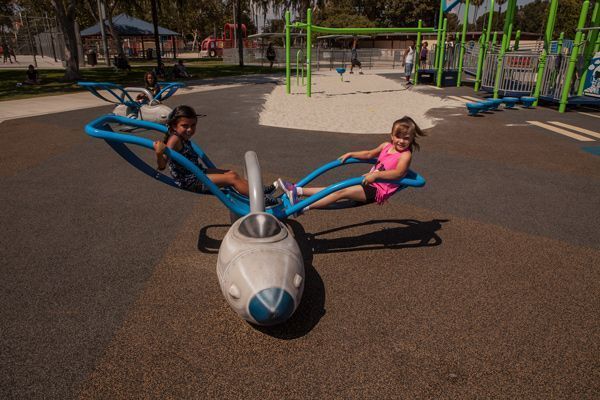 Children can rock back and forth on the wings of custom plane-themed rocking equipment. 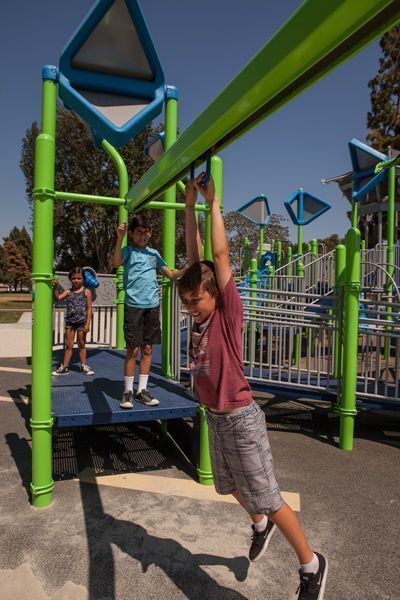 A Little Tikes Commercial® Track Ride allows children to fly through the air!

One of the most popular features at the new playground is the Little Tikes Commercial® equipment fitted with rope climbing and overhead events to challenge active children. A Little Tikes Commercial® Sway Net provides fun for multiple children as they work in sync to rock the net back and forth. Arch swings and spinners also dot the play area for fun away from the main structure. 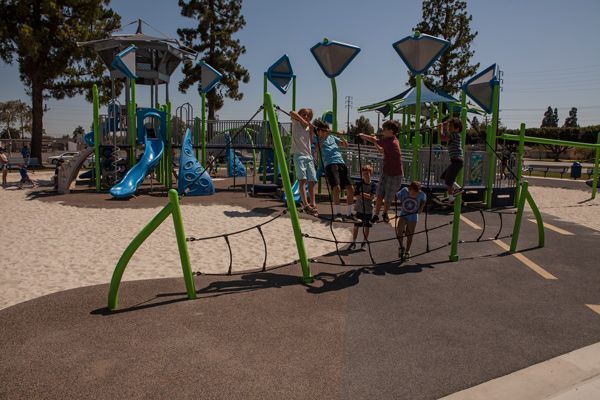 A Little Tikes Commercial® Sway Net provides fun for multiple children as they work in sync to rock the net back and forth. 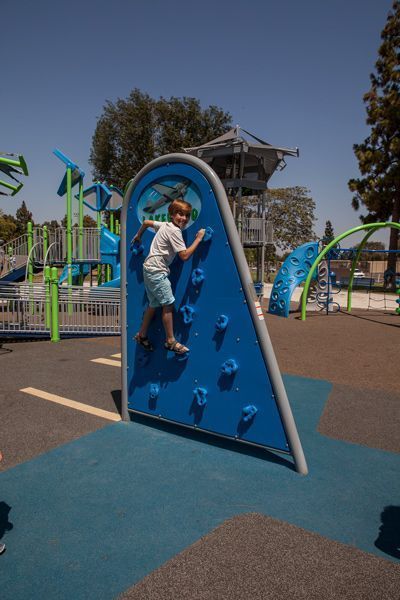 The tail of the plane doubles as a 2 sided climbing wall. The Spectraturf® surfacing runway and tail are also visible.

A Celebration on Memorial Day

The Grand Opening of the new Veterans Memorial Plaza at Del Valle Park was on Memorial Day 2015. After 15 months of meticulous planning, designing and construction, the playground was opened to a crowd of eager visitors on May 21, 2016. Today, Lakewood residents have another beautiful park to enjoy for years to come. The Little Tikes Commercial® playground was custom designed to expand the impact of the Veterans Memorial Plaza. The playground delivers exciting and challenging play in a safe and inclusive play environment. The vibrancy of the site is both inviting and inspirational, set against a backdrop of trees and blue California skies. Airplane Park is sure to be a favorite destination for years to come.

Another bird’s eye view of the entire playground highlights the impact of the themed feature elements and creative surfacing designs.