How Playgrounds Can Impact Cognitive Development

How Playgrounds Can Impact Cognitive Development

Cognition isn’t all serious business. Kids can develop their thinking abilities through cognitive play. As they enjoy time on the playground, they can take in new sensory information and develop their ability to reason, communicate, and interact with the world around them. Let’s take a deeper look at what cognitive development looks like in childhood and how playgrounds impact cognitive development in positive ways.

What Is Cognitive Development?

A person’s cognition is, put simply, their ability to think. More specifically, it’s the process people use to acquire and make sense of knowledge. Cognitive development, then, is the growth and maturation of this ability. There are various aspects of cognitive abilities, including information processing, reasoning, problem-solving, memory, and language development.

Children start developing their cognitive skills as infants. Every piece of information they take in about the world around them can help them learn about how the world works. Babies use their senses to learn more about the world and start testing concepts like little scientists, especially when they become toddlers. As memory develops, children can more effectively store and organize the data they gather to notice patterns and form conclusions.

As with other types of development, there are some general stages of cognitive development that children tend to move through.

One way of understanding these stages in early childhood is to look at the type of development infants and toddlers experience versus the developmental milestones that preschoolers experience. The Head Start Early Learning Outcomes Framework outlines what cognitive development looks like in these age groups.

For infants and toddlers, cognitive development is largely focused on:

We can also start to see mathematical thinking emerge in the toddler years.

As preschoolers, children’s cognitive development takes off in two different areas — mathematics and scientific reasoning. These two domains include understanding: 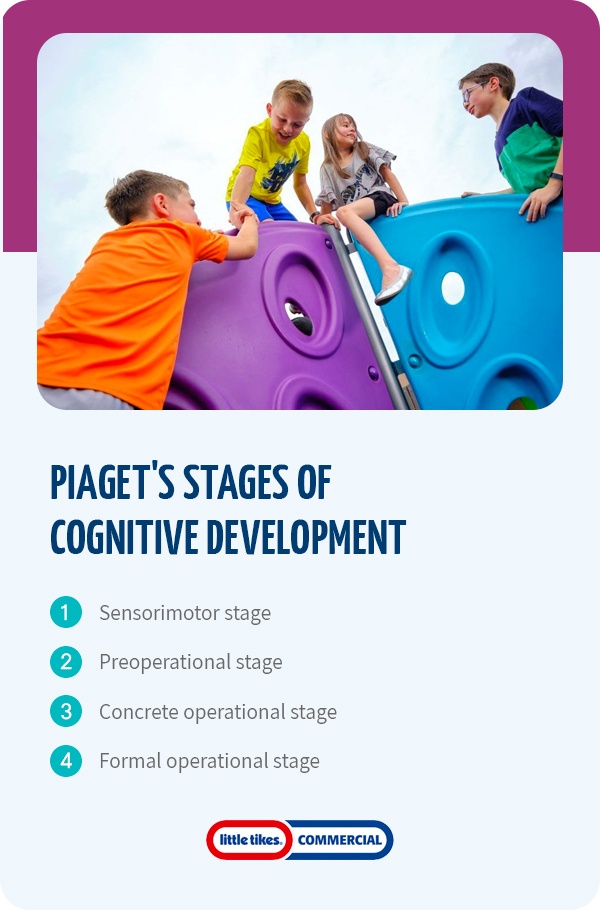 Another way we can look at cognitive development for children all the way from birth to 12 years and older is through Piaget’s four stages of cognitive development. Jean Piaget was the first psychologist to focus on children’s cognitive development and identify stages that describe the changes in how children think. Piaget pointed out that these changes don’t just represent a quantitative change in thinking but a qualitative one. In other words, children don’t just acquire more knowledge — the way they think changes fundamentally over time with each stage.

Why Is Cognitive Development Important?

Children develop in several key ways, including physical, social, and emotional. Cognitive development is another critical aspect of the way children mature, and this development moves at a relatively rapid pace. During a child’s first few years of life, their brain is forming more than 1 million new neural connections every second!

As children’s brains evolve, they become capable of more sophisticated modes of thinking and reasoning. These capabilities help them acquire knowledge, develop language abilities, and ultimately make sense of the world and their identity as unique human beings. The more children understand and are able to think for themselves, the more confident and in control they’re likely to feel. One day, they’ll be able to trust their own reasoning as they make decisions rather than relying on an adult to guide them.

How Do Playgrounds Contribute to Cognitive Development?

Playtime isn’t only fun for kids — though it is certainly that. It’s also a vital way children develop cognition. What is cognitive play? You may picture educational activity sheets or games, but nearly any type of play involves cognition, including play that seems primarily physical. On the playground, a child engages their body and their brain. Let’s look at the impact of playgrounds on cognitive development in several key ways.

Remember that, for younger children especially, sensory experiences and motor activities are primary ways of learning about the world. Each time a toddler touches a new texture or moves their body in a new way, they learn a little bit more about themselves and their environment. Playgrounds provide a wealth of opportunities for these sensory and motor experiences. In fact, some play equipment is specifically designed to engage the senses in exciting ways.

Even a baby who isn’t ready to use most playground equipment can still have a great time and learn a lot at the playground. By observing the bigger kids, they can lay a foundation for future play. They can also use their senses to experience the natural environment. All children should spend time outdoors from an early age to foster their natural sense of curiosity.

As children get older, they can experience more physical forms of play that help them learn more about how their bodies move and how the world works. A child’s first physics lesson may be on the playground when their friend gets off the seesaw, for example.

Several types of play on the playground can help children develop their creativity — especially symbolic and fantasy play.

In symbolic play, children use objects in a way that depends on some other object or concept for meaning. Symbolic play generally involves artistic activities. For example, children may enjoy drawing with sidewalk chalk at the playground and may even choose to draw their family or their house. They may also use musical equipment to make fun melodies on the playground. Symbolic play draws on and further develops a critical cognitive skill that is necessary for numeracy, literacy, and abstract thinking.

Fantasy play is also called pretend play or dramatic play. Even as toddlers, children start pretending when they play. This type of play helps kids test out ideas, develop problem-solving abilities, practice language skills, and try on different social and emotional roles. Some playground equipment is especially conducive to pretend play. This equipment essentially provides the set and props to help kids’ imaginations take off. They may get to pretend they’re riding on the back of a dragon or running a local business. Either way, they’re growing their cognitive skills.

The cognitive benefits of playgrounds even follow children when they leave the playground and enter the classroom or other learning environments. For one, free play can help kids learn how to entertain themselves and widen their attention spans so they have a greater capacity for sustained focus. If all a child does for entertainment is passively watch short videos, for example, they won’t get a chance to practice actively concentrating on one thing for a sustained period.

Free play may not seem like it requires concentration, but a 20-minute attempt at getting across the monkey bars or a 30-minute game of pretend requires kids to give their focus to one task, just like they would have to in math class or during a music lesson.

Outdoor play boosts productivity and academic achievement, as evidenced by a wealth of research. When children have a chance to enjoy recess, they return to class better prepared to stay on task. They are also likely to be better behaved, reducing distractions in the classroom and allowing teachers to cover more instructional material.

Playgrounds also make education more fun. Children stay in learning mode. They’re constantly taking in new information about the world as their brain develops. But learning shouldn’t come at the expense of fun. Some educational tasks may feel a bit dull, but wherever possible, it helps to infuse learning with excitement. Making learning fun can keep kids more engaged and excited about what they’re learning.

On the playground, kids get a chance to learn all sorts of lessons. Rather than being lectured on the importance of sharing, for example, kids get a chance to build empathy and learn how sharing helps everyone have a fun time firsthand. This lesson isn’t only more fun — it’s likely to be more effective.

Similarly, completing an activity in a workbook may not be as fun as engaging with the same activity on an activity panel at the playground. Cognitive activity panels can help kids learn all sorts of concepts and further their cognitive development. They could learn the alphabet in sign language or braille, they could learn about the weather cycle or solar system, or they could play a matching game. All of these activities can further kids’ cognitive abilities and their knowledge about the world in a fun way.

Children are naturally curious, and their cognition is sure to develop. But we as adults can help this development along and help kids have fun in the process. The playground is a great place to do just that. Kids can learn valuable life lessons and sharpen their cognitive skills, all while having a great time.

If you’re designing a playground to help with cognitive development, be sure to consider the quality playground equipment from Little Tikes Commercial. All our products are designed with input from childhood development experts so we can be sure children benefit in a variety of ways, including cognitively, from playing on Little Tikes Commercial equipment. Request a quote to get started!